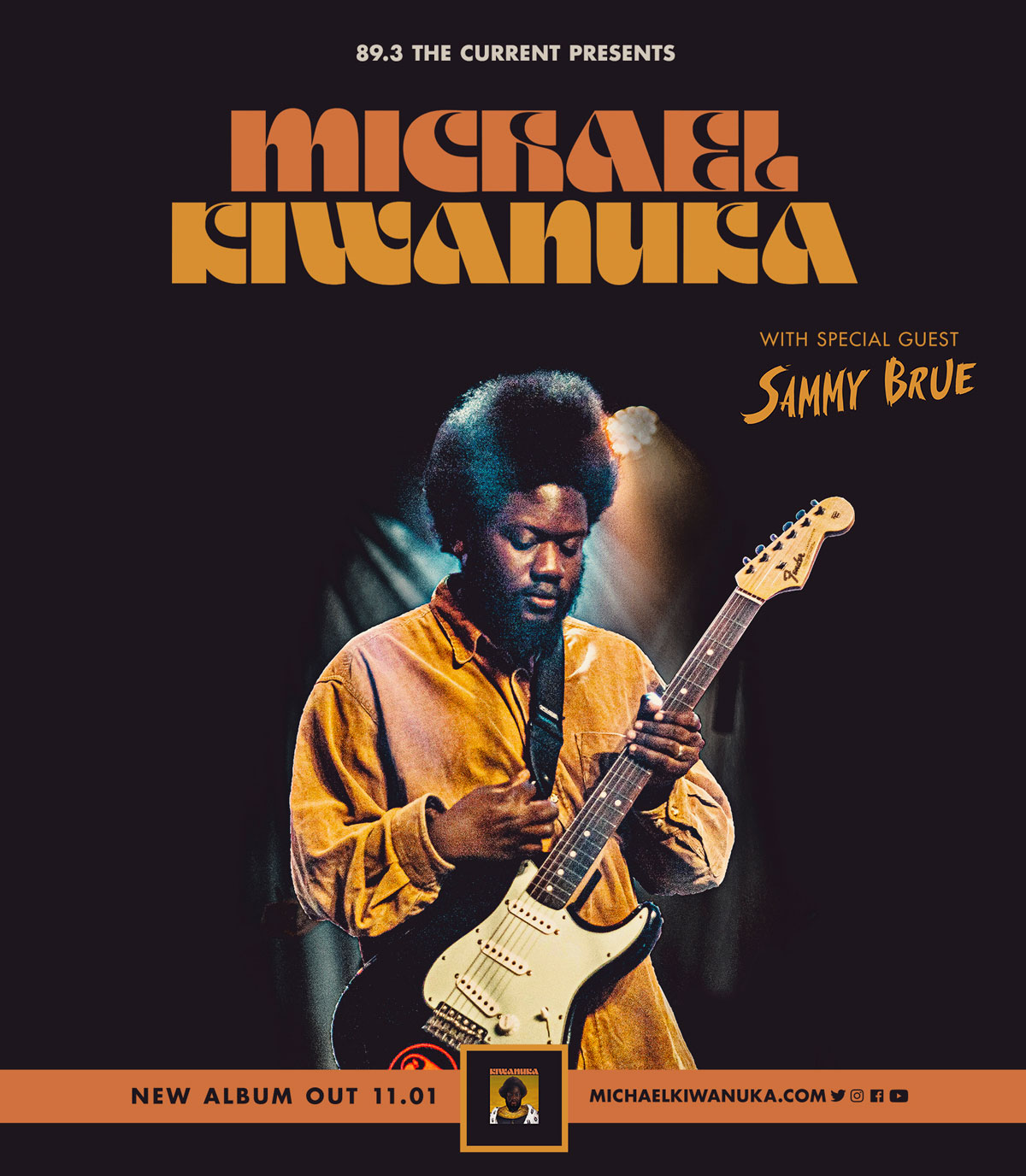 The self-titled record usually marks a definable phase of a musician’s career; an embrace of personal mythology, perhaps, or merely a shift to ‘take me as I am’ straightforwardness. But Kiwanuka, the single eponymous word that heralds Michael Kiwanuka’s third album, holds a resonant, complex significance. It signals, for one thing, a swift, pointed rejection of the stage personas that artists have historically donned as both a freeing creative mask and a protective shield.

It is an act of cultural affirmation and self-acceptance: a young British-African, contemplating the continued struggle for racial equality, and proudly celebrating the Ugandan name his old teachers in Muswell Hill would struggle to pronounce. It is a nod to a suite of arresting, ambitious soul songs that – while they deftly recall the funkified epics of artists as varied as Gil Scot-Heron, Fela Kuti, Bobby Womack and Kendrick Lamar – cement the singular, supremely confident sound that made 2016’s Love & Hate such an undeniable step up.

Now, following ‘Money’ – the lauded summer single collaboration with Tom Misch – and a sunset Park Stage set that was the talk of Glastonbury 2019, the long-awaited follow-up to that record can be announced. And Kiwanuka, like its creator, contains multitudes; it offers both the triumphal, grin-widening empowerment of opener ‘You Ain’t the Problem’ and the ruminative, candlelit intimacy of ‘Solid Ground’. It looks inward and out, across widescreen sonic landscapes constructed in recording studios in London, Los Angeles and New York, and provides a sumptuous showcase for the honey-poured mahogany of Kiwanuka’s voice. It skillfully crosses the streams of the personal and the political. No other name would really have done.

“I remember when I first signed a record deal, people would ask me, ‘So what are you going to be called?’” laughs the man himself, considering the thought process that inspired the title. “And I never thought of that; calling myself Johnny Thunders or whatever, like singers from the past. But I have thought previously, would I sell more records if my name had an easier ring to it? So [on this album] it’s kind of a defiant thing; finally I’m engaging with who I am and I’m not going to have an alter ego, or become Sasha Fierce or Ziggy Stardust, even though everyone’s telling me I need to be this, that or the other. I can just be Michael Kiwanuka.”

In many ways this self-possession is a direct consequence of Love & Hate. That record added an unexpected Mayfieldian groove and scope to to the scuffed, ‘70s-infused mellowness of Home Again, Kiwanuka’s Mercury-nominated 2012 debut. Album number two, of course, got its own place on the Mercury shortlist (not to mention a No 1 chart position, a Brit Award-nomination and the wide cultural blast radius afforded by songs that featured on shows like The Get Down, When They See Us, and most notably, HBO’s Emmy-winning Big Little Lies).

The trio had sketched out around eight songs – including lyricless, early versions of ‘You Ain’t the Problem’ and the spine-tingling, wintry ballad ‘Piano Joint (This Kind of Love)’ – at such a breathless gallop that Kiwanuka felt some of his old doubts and insecurities creep back. “It was all so fast,” he reasons. “I remember having a conversation with Danger Mouse where I even asked, ‘Is this my album?’” He chuckles at the memory. “That was the lack of self-belief and me beating myself up.”

An extended recess was called and, when the team fully reconvened in New York in November 2018, Kiwanuka returned to the project with a new vigour, confidence and a clear sense of this new record’s themes and immersive, sonic textures. It was here that he actualized the lyrically knotty, comforting message of ‘You Ain’t the Problem’ (“It almost made me feel like being a rapper,” he grins); where he turned ‘Hero’ into a shape-shifting, thunderously percussive mini-movie, partly inspired by slain civil rights activist Fred Hampton; here that he crafted the hazy refrain that allied with Danger Mouse’s rhythm guitar playing to give psych-gospel highlight ‘I’ve Been Dazed’ its eerie, hypnotic power.

“We had three weeks and every day I would just do this half-hour walk from my hotel by the Brooklyn Bridge to the studio in Red Hook, listening to backing tracks and scribbling lyrics on hotel paper or in my little scrapbook,” he says, more than a little wistfully. “It felt like being 15. And that excitement and childish imagination really helped me forget that it was a scary process.” This youthful sense of play also led to the invocation of some, possibly surprising, tonal influences from Kiwanuka’s childhood as a skater kid who loved Nirvana and Green Day as much as Outkast and Lauryn Hill. Using the cinematic skits and interludes of a record like by The Fugees as a springboard, Kiwanuka wondered if the horn-drenched grandeur of previous lengthy songs like ‘Love & Hate’ and ‘Father’s Child’ could be intensified and transformed into something even more atmospheric, more immersive.

The result is the unhurried, auterish poise that may be one of Kiwanuka’s most striking features. ‘Piano Joint (This Kind of Love) Intro’ sets the scene with windblown harmonies and a rumbling, canyon-deep baritone to rival Isaac Hayes (it’s actually Kiwanuka, detuned). ‘Another Human Being’ features a jolting gunshot and a quote taken from a participant in the Civil Rights ‘sit-in’ protests that swept through North Carolina in 1960 (‘Interlude (Living All the People)’ also features the voice of congressman and activist John Lewis). ‘Hard To Say Goodbye’ is a dawn-lit, 7-minute opus that Kiwanuka garnished with the sampled sound of twittering birds.

And he even allowed himself to be coaxed towards stretches of musical terrain that he would never have ordinarily explored. When Danger Mouse first started working towards the skipping, almost ‘80s rhythm of ‘Final Days’ – about as far from Home Again’s retro-soul as this new record gets – Kiwanuka was hesitant. “It’s kind of spacey so I took a lot of convincing,” he admits. “But we went the whole hog with it and it’s one of my favorite songs now.”

It tells its own story that Kiwanuka – who came up in the pub rooms of London’s acoustic scene before winning the BBC’s Sound Of 2012 poll – is now so happily embracing musical touchstones and styles that may have once seemed contradictory. The revelatory, confessional core of ‘Black Man in a White World’ (which grappled with identity and Kiwanuka’s status in communities where he was conspicuously the only ethnic minority) has evolved into something a little more certain. Now, Kiwanuka’s reengagement with his Ugandan heritage (he hopes, he notes, to play some shows there soon) manifests in skittering Afrobeat drums and guitar lines that he hopes possess “the feeling of a Fela track”.

“The last album came from an introspective place and felt like therapy, I guess,” he reasons, surveying it all. “This one was a bit more about feeling comfortable in who I am and asking what I wanted to say. Like, how could I be bold and challenge myself and the listener? It is about self-acceptance in a bit more of a triumphant rather than a melancholy way.”

Kiwanuka solidifies one of British music’s more remarkable career progressions. The man behind it has put his immense natural gifts to work in an album that wields difficult subjects – black identity, violence, self-doubt – with a light touch and a dramatist’s sense of mood, space and atmosphere. “The things that end up being enjoyed are often things you want to hide,” he says, quietly. “But obviously that’s the stuff that makes us connect.” Telling people who you are – truly, unabashedly showing yourself – has never sounded more thrilling.

Since Sammy Brue released his debut album I Am Nice in 2017 (produced by Ben Tanner of Alabama Shakes and John Paul White of the Civil Wars), the now-18-year-old Utah singer-songwriter has been hailed as an “Americana prodigy” by Rolling Stone, as a “wunderkind” by American Songwriter, been labeled one of the “teenagers shaping pop” by The New Yorker; and performed at the Newport Folk Festival and played shows with the likes of Lucinda Williams, Lukas Nelson and Hayes Carll.

Sammy Brue has been writing songs since the age of 10. After receiving an acoustic guitar from his father for Christmas, he quickly embraced the instrument and began learning the songs of Bob Dylan and Woody Guthrie. Since writing his first song (a fingerpicked, autobiographical tune titled “The Woody Guthrie Song”) at the age of 11, Brue has released three homespun EPs, his New West full-length debut, I Am Nice, and a 2018 EP, Down with Desperation. His sophomore record will be released in the Spring of 2020, on New West Records.